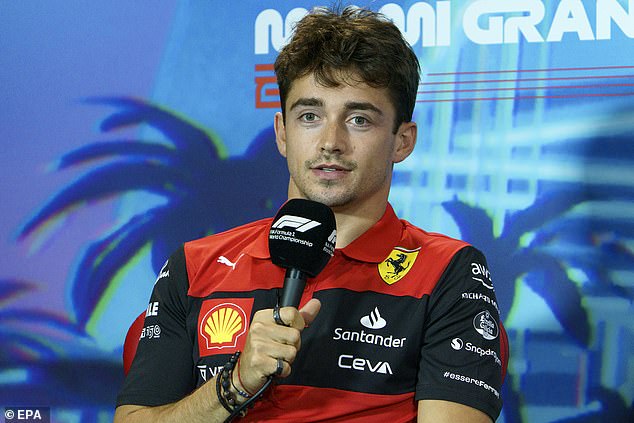 Championship leader Charles Leclerc led the way in opening practice for Sunday’s inaugural Miami Grand Prix while Lewis Hamilton struggled to meet the mark once again. Ferrari’s Leclerc finished just 0.071 seconds clear of George Russell, Max Verstappen finished in third and Hamilton languished in eighth. And while Leclerc, who leads Verstappen by 27 points, was the fastest out of the blocks, Mercedes will take comfort from their first showing of the weekend. However, Hamilton, who finished only 13th a fortnight ago, was 0.858 sec back – although his speediest lap was compromised by traffic. Carlos Sainz crashed out on the opening lap of the past two rounds in Melbourne and Imola, and the Spaniard suffered a front-right puncture after losing control of his Ferrari through Turns 4 and 5 and limping back to the pits. Verstappen, who dominated in Imola to get his championship defence back on track, finished 0.179 sec back from Leclerc, with Serio Perez fourth in the other Red Bull.