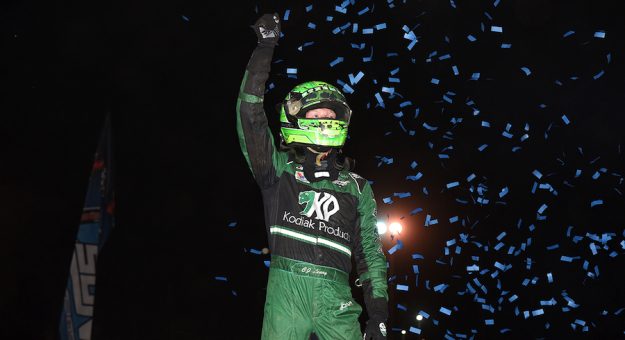 Leary made a mid-race strategy adjustment en route to winning Friday night’s Indiana Open Wheel Bill Gardner Sprintacular feature at Lincoln Park Speedway. On lap 12, Thomas played the limbo line to perfection, overtaking Leary in turns three and four to take over second. First, Leary disposed of Thomas on the initial lap of his high line excursion on lap 15. Now running second, Leary repeated the same verse and flew around Ballou to lead lap 16 at the line by the miniscule margin of .018 seconds. With the laps waning down to six to go, Leary continued to stretch his way out from Ballou. After the surging Brady Bacon nearly ripped away second from him, and seeing Leary up his lead to 2.25 seconds, Ballou decided enough was enough and traveled back to the bottom to resecure the line.