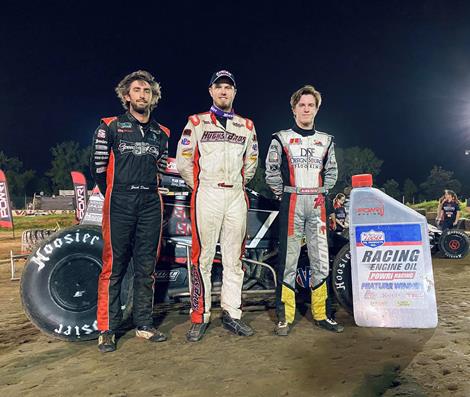 Kory Schudy Shines in POWRi WAR Thunder in the Valley

(07/17/2021) With over a month since the last competition, a stout field of Lucas Oil POWRi Wingless Auto Racing Sprint League drivers would flock to Valley Speedway for Thunder in the Valley. Early racing action would witness Mitchell Moore, Lane Stone, Mario Clouser, and Ty Hulsey all claim heat racing victories with Hulsey earning the high point qualifier award for the event from a fifth starting spot to winning his heat race, as Joe B. Miller grabbed the semi-feature victory. One-time leader Hulsey would slip in the latter stages of the feature event finishing fourth as flying from sixteenth would see Chris Morgan round out the Valley Speedway top-five finishers for the POWRi WAR Sprint League. Lucas Oil POWRi WAR Feature Results at Valley Speedway on July 17th, 2021:
1. Up next for the Lucas Oil POWRi WAR Sprint League will be a two-day return trip to Lake Ozark Speedway on July 23rd and 24th.