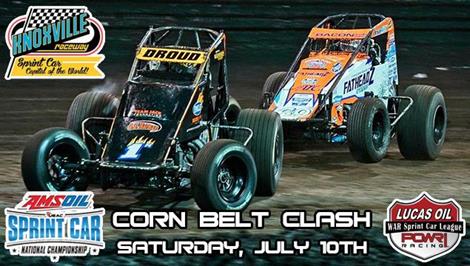 (11/19/2020) Initially run as the Corn Belt Nationals the renamed Corn Belt Clash, held annually at Knoxville Raceway since 2018, will go from a two-day event to a single day spectacle and feature great co-sanctioned racing from the POWRi Lucas Oil WAR Sprint League and the USAC AMSOIL National Sprint Car Series. Standing as the single non-wing sprint car race at the historic half-mile in Knoxville Iowa, the Corn Belt clash will now run for Saturday, July 10th, 2021 while maintaining the grand prize of $20,000 to win. POWRi League rules, contingencies, forms, and payouts can be found under the info tab at the top of the POWRi website.