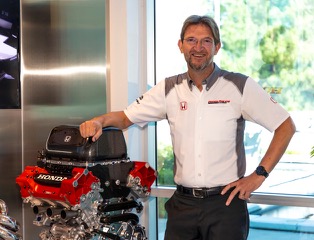 SANTA CLARITA, Calif. – Honda Performance Development has announced that David Salters will become the seventh president in its history, succeeding Ted Klaus, who will retire from HPD on Dec. 1 after a 30-year career with Honda. A veteran race engineer with more than a quarter century of experience in the world’s pinnacle racing series of Formula 1 and IndyCar, Salters will lead HPD, founded in 1993, into an exciting new stage of North American motorsports, including the development of a new electrified power unit for IndyCar. Salters joined HPD in 2015 as a chief engineer and engine technical leader, serving as technical director since 2019. Klaus, who became president of HPD in April 2019, joined Honda in 1990 at Honda R&D Americas, Inc. in Ohio, where the company has a full-fledged product development center. “Dave Salters is the right leader, with the right background and experience for what will be an exciting new era for HPD and for racing in North America.”. Under Klaus’ guidance, HPD has delivered tremendous track success in 2019-2020.