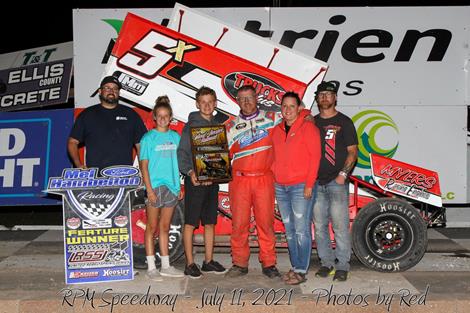 HAYS, Kansas (July 12, 2021) – Twenty-two cars checked in for competition for the Wheat Shocker Nationals finale on Sunday with the Drive to Zero POWRi United Rebel Sprint Series Presented by Mel Hambelton Ford Racing. The front row of Sunday’s 25-lap feature event was composed of Jason Martin and Steven Richardson, who were the top finishers of the pole dash. Jason Martin jumped to the early lead with Luke Cranston and Zach Blurton trailing by about a second for the first five laps. It wasn’t until lap sixteen when Williams reclaimed the fourth position. On lap 22, Blurton made a pass around Cranston to take over the runner-up position. Dash (6 laps): 1) Jason Martin, 2) Steven Richardson, 3) Zach Blurton, 4) Luke Cranston, 5) Jeremy Huish, 6) Ty Williams.