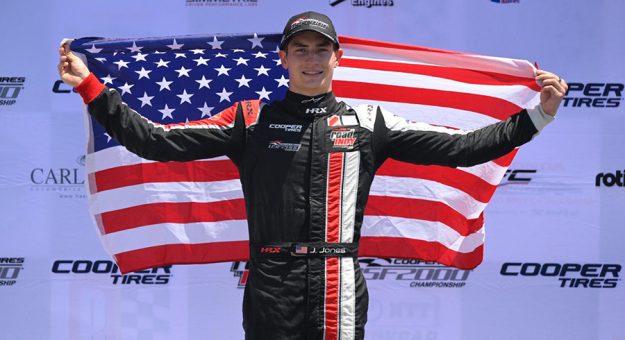 BIRMINGHAM, Ala. – With a familiar last name to racing fans around the world, Jagger Jones has begun carving his own niche in the open-wheel ranks. The 19-year-old grandson of Parnelli Jones claimed his first Cooper Tires USF2000 Championship victory today driving for Cape Motorsports with an impressive run at Barber Motorsports Park. Christian Weir, from Naperville, Illinois, who secured his first-ever Cooper Tires Pole Award in qualifying yesterday, completed the podium for Turn 3 Motorsport. The green flag for USF2000’s Race 2 of the Cooper Tires Grand Prix of Alabama – shortened to 25 minutes – slotted in at 11:10 am under sunny skies.