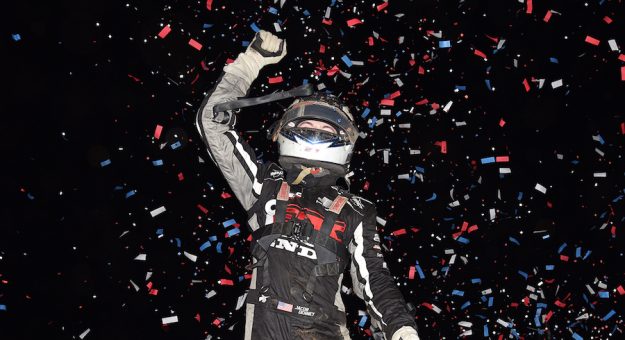 — In what was a night of firsts in USAC NOS Energy Drink Midget National Championship racing, Jacob Denney delivered his first series victory during round four of USAC Indiana Midget Week Thursday at Lincoln Park Speedway. The 17-year-old Denney, making his sixth career USAC National Midget start, had to do it by tracking down one of the all-time greats in USAC Triple Crown champion Jerry Coons Jr. At Lincoln Park, Denney’s sudden emergence hit a crescendo as he became the first first-time victor of the USAC National Midget season. “I knew we had the car to do it,” Denney explained. “I had a feeling, and I was praying and hoping it would,” Denney admitted. Over the course of the next several laps, Coons distanced himself from Denney and the rest of the field. Denney used the drive off the bottom to propel himself past Coons and into the lead.