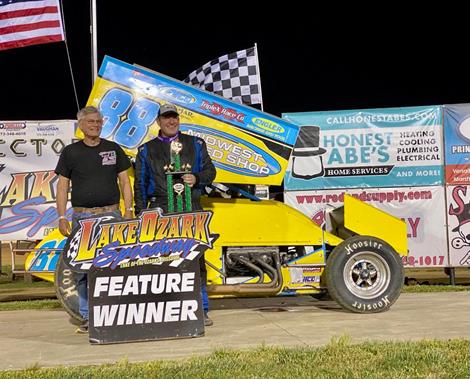 (5/30/22) Leaving the best for last, J Kinder would only need to lead the final fifteen feet of the feature event at the Spring Sprint & Midget Nationals in Lake Ozark Speedway’s POWRi 305 Sprint Division Saturday night, gaining his sixth divisional feature victory in the previous five seasons at The Lake. Leading all but the final lap, Mike Trent would place second in a thrilling race with Randy Martin placing third. Kenny Potter would be in contention toward the front all night to place fourth as Matt Fox rounded out the top-five finishers for the Lake Ozark Speedway POWRi 305 Sprints feature event. Lake Ozark Speedway POWRi 305 Super Sprints | 5/28/22:
A Feature 1 (15 Laps): 1.