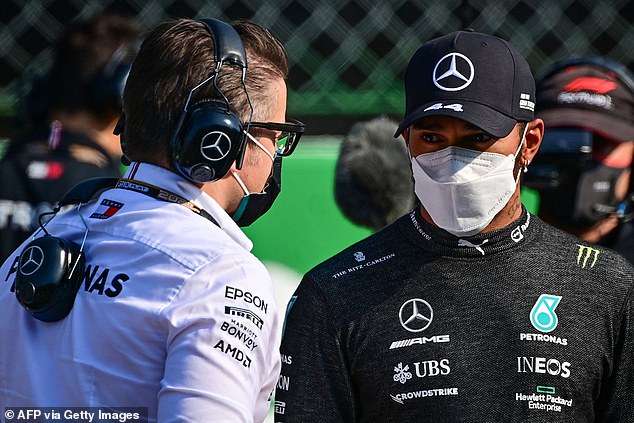 ‘It should be an easy win for him’: Lewis Hamilton RESIGNED to losing to Red Bull and Max Verstappen in Sunday’s Italian Grand Prix after Mercedes man finished fifth in Monza sprint race

Lewis Hamilton fears Max Verstappen will cruise to victory in Sunday’s Italian Grand Prix and extend his championship lead. Hamilton finished only fifth in Saturday’s 18-lap sprint race in Monza following a poor start, with Verstappen taking second behind Valtteri Bottas. Not only did Hamilton fail to score, but he will now have his work cut out on Sunday with a grid position of fourth – promoted one spot following Bottas’ penalty – and both Daniel Ricciardo and Lando Norris between him and Verstappen. As Bottas galloped into the distance, Hamilton could make no impression on Norris. Bottas, this week dropped by Mercedes for 2022, took the chequered flag 2.3 seconds clear of Verstappen, with Hamilton a distant 20 secs adrift of his team-mate.