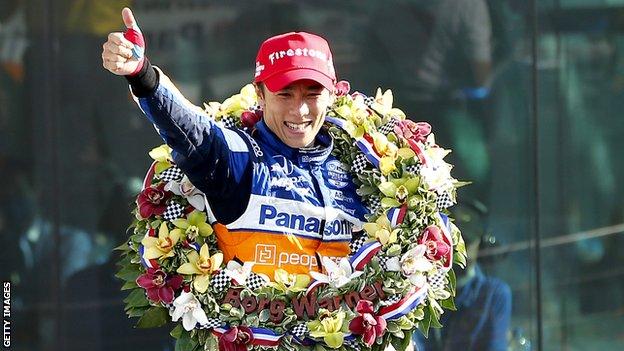 Japanese ex-Formula 1 driver Takuma Sato won the Indianapolis 500 as Fernando Alonso’s hopes faded not long after half distance. Alonso was 15th when he lost a lap to a car problem with 75 laps to go. Sato was leading from Scott Dixon when a crash with three laps left forced the race to finish behind the safety car. Dixon led 111 of the 200 laps but Sato passed him after the final pit stops. Dixon, a five-time Indycar champion who won Indy in 2008, was second, from Sato’s Rahal Letterman team-mate Graham Rahal. Despite that, Alonso was running less than 10 seconds off the lead when a clutch problem immediately after a pit stop during one of the race’s seven safety-car periods required a second stop immediately afterwards and put him a lap behind, effectively ending his already slim hopes.

Love this race. Congrats Sato. Anticlimactic ending though under yellow