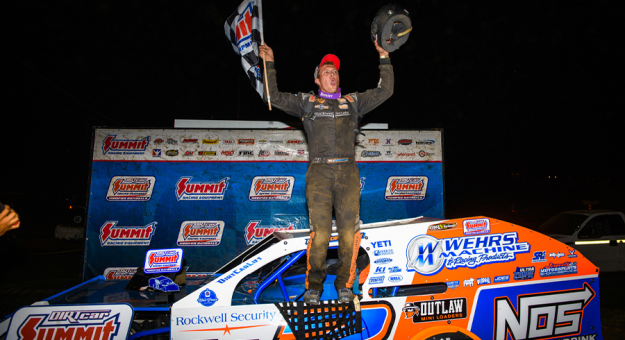 LEWISTOWN, Ill. – A tough field of local cars, regional invaders, and a season-low ninth-place starting spot. With six laps remaining, he was just .7 seconds behind Krup and closing fast. “Once I got to fifth and saw Tyler (Nicely) and those guys in front of me, they were only about a half-straightaway out… I was like, ‘man, I think I can get this done if I just clear these lapped cars the way I need to,’” Hoffman said. “Once I got past Nicely, that put me into third behind Allen and Will (Krup), the track was just getting slicker and slower, which was coming to me and going away from them.”. “I told (Krup) before the race, I said, ‘Plan on seeing me,’” Hoffman said lightheartedly. Krup said he had no idea Hoffman was closing until Hoffman poked his nose underneath to try and make the pass.