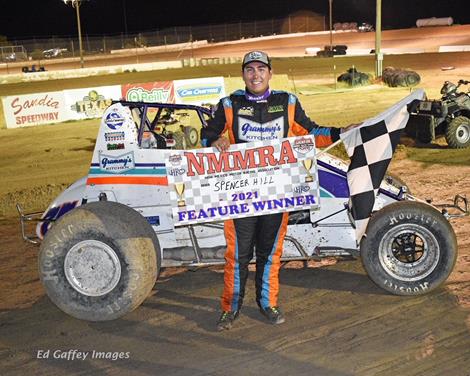 Albuquerque, NM (7/24/21) – After finally snapping a winless streak spanning over six years, Spencer Hill did not waste any time backing up his first victory as he captured his second career Lucas Oil POWRi NMMRA Sprint Car Series win on Saturday night at Sandia Speedway. His round 11 win now places Hill as one of three drivers to record multiple wins in the 2021 season. Hill was on the tail tank of Amos for much of the race but was unable to complete a pass with a lap and a half to go, and fell to 3rd. After a few close calls, it would be Albuquerque, New Mexico’s Spencer Hill picking up his second victory of the 2021 Lucas Oil POWRi NMMRA Sprint Car Series season, and his second sprint car win of his career. Heat 1 (Results): 1-Stelzig.C 2-Oldfield.T 3-Grady.J 4-Bonesteel.JR 5-Stringfellow.C 6-Miller.C
Heat 2 (Results): 1-Amos.D 2-Saiz.C 3-Hill.S 4-Higginbotham.J 5-Marfia.R.