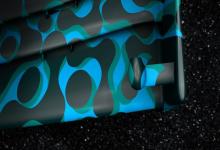 Haas’ new Formula 1 car will be unveiled on Thursday and is set to run in the black and gold colours of the team’s new title sponsor, Rich Energy.
Haas has given a nod towards the radically revised livery of its 2019 Formula 1 car after posting a picture of its new team kit for the upcoming season on Twitter on Wednesday.
Haas has typically raced in red, grey and white since joining the F1 grid in 2016, but announced last October it had struck an agreement for energy drink company Rich Energy to become its title sponsor for the 2019 season.