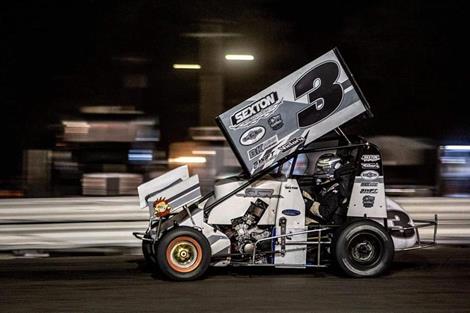 (8/13/2021) Starting the Inaugural Lucas Oil POWRi Minn-Kota Lightning Sprints Summer Shoot-Out in style with twenty-nine entries, competitors from all over the United States would battle wing-to-wing for nearly every position on the beautifully prepared Norman County Fairgrounds. Leading the remainder of the action-packed feature, the 2019 POWRi Lightning Sprints Nationals winner Grant Sexton would claim more hardware and pocket the $1000 payday by winning Night One of the POWRi Lightning Sprint Summer Shoot-Out. Sharing hard-charging award would also witness Dalton Sexton coming from the semi-feature to finish fourth after racing around fourteen other drivers as well with one-time leader Bryce Haugeberg fading in the later stages of the feature to round out the top-five finishers at Norman County Fairgrounds for Night One of the POWRi Minn-Kota Lightning Sprints Summer Shoot-Out. Feature Results for POWRi MKLS at Norman County Fairground on 8/12/2021:
1.