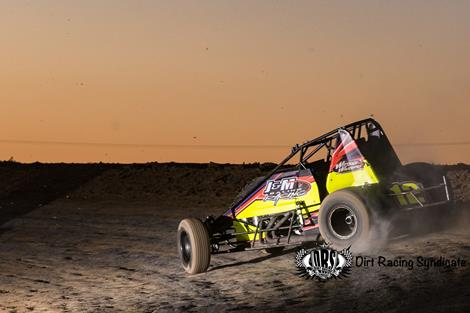 Grady Doubles Down While Stelzig Impresses at Sandia

Albuquerque, NM (5/5/21) – The Lucas Oil POWRi NMMRA Sprint Car Series returned to Sandia Speedway for ‘Blazing Battle’ on Saturday night. After a random pill draw, drivers were then split between three eight-lap heat races that would take the top three to the re-draw. Impressive rookie contender, Caleb Stelzig, would capture yet another heat race win in heat 2 over Josh Grady and Randy Smith. Travis Oldfield was on top of the podium in heat 3 as he pulled away from Dillon Tanner and Robert Marfia to win his second heat race of the season as well. The holeshot would go to Travis Oldfield, as he worked to pull away from Tanner and Stelzig early. 11w of Oldfield out front after Stelzig would get too tight in the first corner.