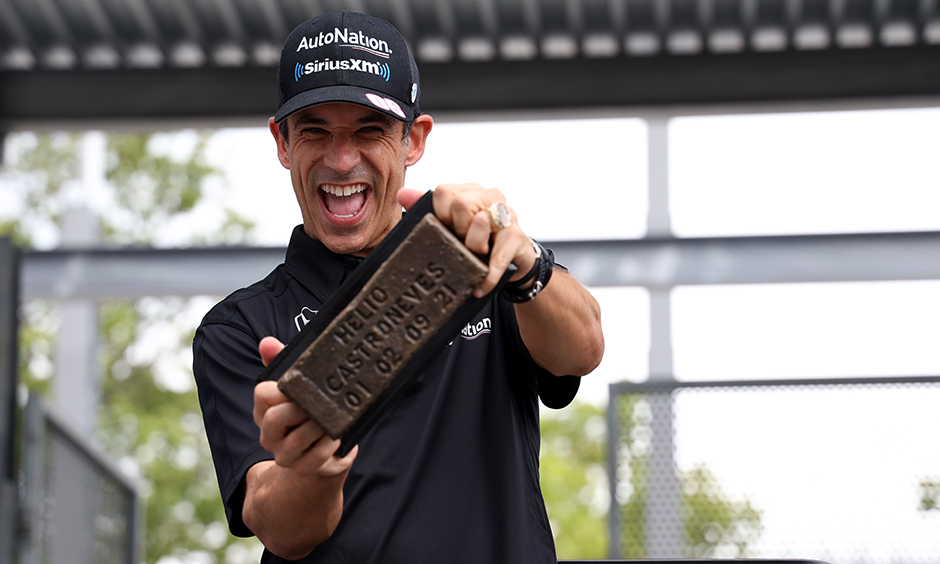 Winning at the Indianapolis Motor Speedway is an accomplishment that keeps on giving, and in his first race weekend back at the Racing Capital of the World since winning his record-tying fourth Indianapolis 500 in May, Helio Castroneves found that to be especially true. Castroneves was voted in as the Open Wheel representative by a 200-member panel alongside classmates Peter Brock, Dick LaHaie, Banjo Matthews, Denise McCluggage, Raymond Parks, Jack Roush, Terry Vance and Byron Hines. Castroneves was joined at the Motorsports Hall of Fame of America announcement by IMS President J. Douglas Boles, IMS Chairman Roger Penske and longtime motorsports reporter Robin Miller, among others. Castroneves’ honor Friday came after the Meyer Shank Racing driver was welcomed back to Indianapolis with a “happy hour” celebration with race fans outside the famed Gate 1 Thursday night. At the event, Castroneves was presented with a bronze brick that immortalizes his place in Indy 500 history. Castroneves, 46, gets to keep the brick he was presented Thursday night, while another will be permanently placed in the famed Yard of Bricks on the IMS main straightaway alongside the race’s other four-time winners: A.J. Castroneves’ return to IMS after becoming one of the most historic drivers in the 110-year history of the Speedway was always going to be special, but the events of Thursday and Friday were a proper welcome back before he even hits the racetrack for the NTT INDYCAR SERIES race this weekend. That’s why I work hard, and that’s why this preparation for these next four races is so important for me so that I am ready and get ready for the competition (in 2022).”.