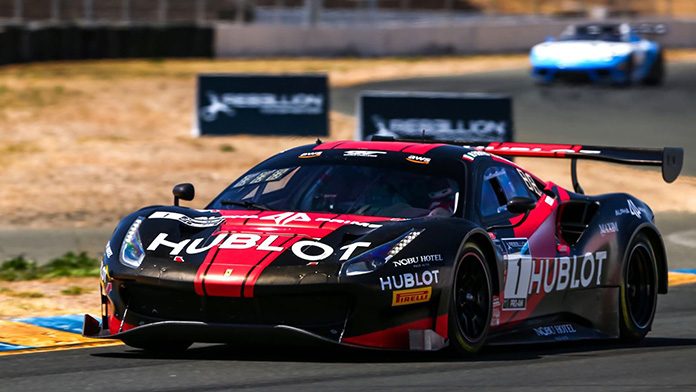 SONOMA, Calif. – Squadra Corse Ferrari drivers Martin Fuentes and Rodrigo Baptista won Saturday afternoon’s GT World Challenge America powered by AWS race at Sonoma Raceway. Drama then ensued shortly before the official pit window opening, as Blackstock came into the pits and changed over to Hindman. 93 car in the pits, Fuentes moved into the lead over Sofronas and Poordad. At the 45-minute mark of the race, the official pit window opened, and Fuentes came in first to change over to Baptista. Baptista moved into the overall lead, with Bleekemolen second and Root third. Baptista’s lead evaporated and the field bunched up for the restart of the race. With battles raging behind him Baptista built his lead to 3.2 seconds and at the checkered, crossed the line 2.074 seconds ahead of Bleekemolen. “We are happy, we are back in the lead in the championship.”.