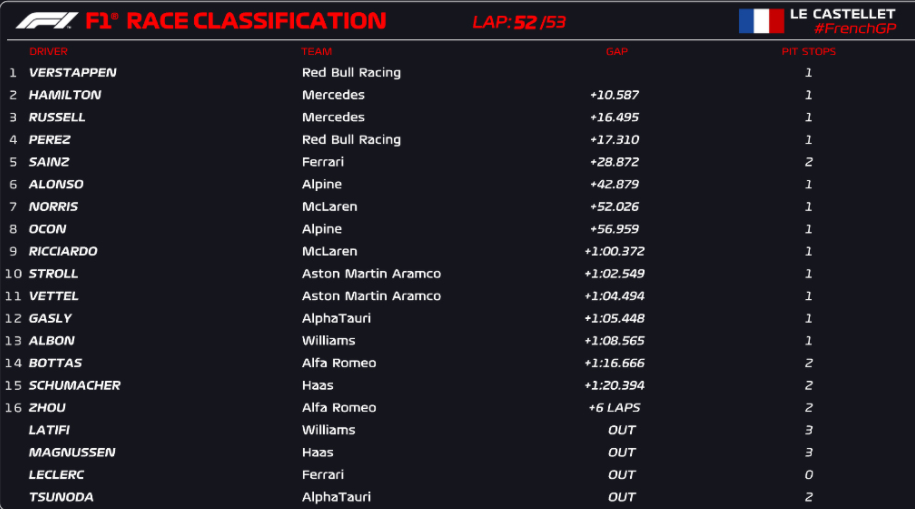 LEWIS HAMILTON is a lot closer to where he will feel he belongs after a second placed finish with Mercedes at the French Grand Prix. Congratulations to Max Verstappen on his win and Lewis Hamilton on coming second. Verstappen stands on the top step of the podium as the drivers prepare to spray each other with champagne. Verstappen is back in the winning groove and had a 10 second gap to second-pace by the time he crossed the line. Hamilton comes 2nd on his 300th Grand Prix while Russell holds off Perez to claim third. Russell is still right on the back of Sergio Perez as he tries to hunt down 3rd and a podium. But he’s 20 seconds behind Russell and will now certainly finish p5. We’ve just had a great few laps in what has been a surprisingly brilliant French Grand Prix. Russell is furious about the way Perez rejoined the track after Russell went into him, and team boss Toto Wolff had to come onto team radio to tell the British driver to put his head down. Verstappen is cruising to victory meanwhile with a 9 second lead over Hamilton. Russell is less than a second behind Perez and those two have a podium to battle over now Sainz is out of the way. Perez, in third, has a 2.6 second lead on Sainz in the fight for the podium.