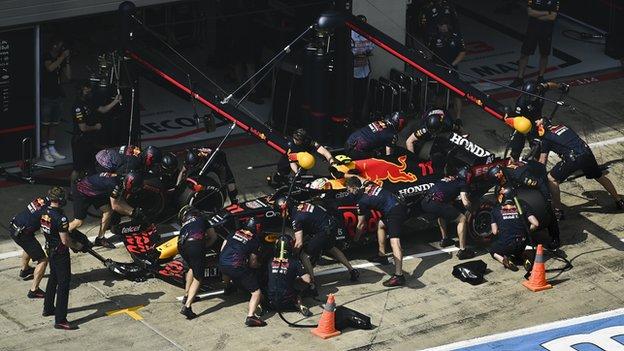 Red Bull team principal Christian Horner has described a rule change introduced to ensure safety at pit stops as “disappointing”. Horner said he believed rivals had deliberately targeted his team. Red Bull regularly have the fastest pit stops and are consistently faster than title rivals Mercedes in that area. Mercedes team principal Toto Wolff admitted his team had made an inquiry to governing body the FIA about pit stops but said it was in reference to their own procedures. Horner said: “To have to hold the car for two tenths of a second, you could almost argue it’s dangerous because you’re judging your gaps. “Safety for our pit crew is one of the most important things for us as a team,” he said. Horner said he believed Red Bull were being deliberately targeted, following recent rulings aimed at ensuring teams were not using flexible rear wings and mandating stricter tyre-operating protocols. Horner said: “You can see there’s an awful lot of pointed activity in our direction in the moment.