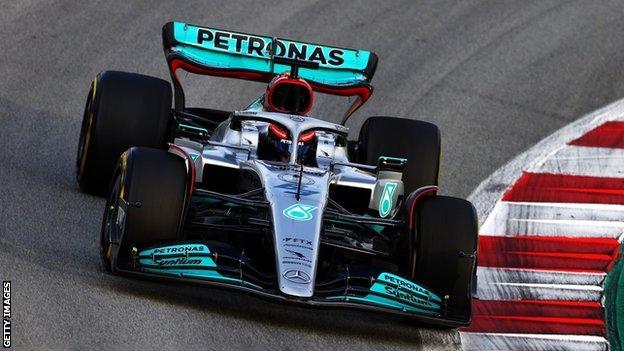 Mercedes are behind Ferrari and McLaren after two days of pre-season testing, says driver George Russell. “Some teams are looking pretty fast – a red team and an orange team in particular look very competitive,” said Russell, alluding to the colours of the Ferrari and McLaren teams. Russell said McLaren and Ferrari “look very strong on low fuel and high fuel and with the tyre management”. “A positive day, we have done many laps and slowly we get to understand the car and push it a bit more. Ferrari team boss Mattia Binotto said: “The times are very close, which was one of the intentions of the new regulations. Russell said Mercedes were one of the many teams suffering from a phenomenon whereby the cars bounce on the straights. Russell said: “You could see some substantial issues with some of the cars in the straights and the bottoming.