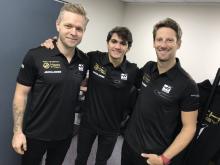 Racing Point F1 Team and Alfa Romeo Racing made official on the F1 entry list for the 2019 season.
The FIA has confirmed Force India and Sauber’s name changes ahead of the 2019 Formula 1 season after publishing the finalised entry list.
As a result, the team will stick with Racing Point for 2019, with the official name being confirmed on the final entry list.
The other main change is confirmation from the FIA of Sauber’s name change, which was announced last week.