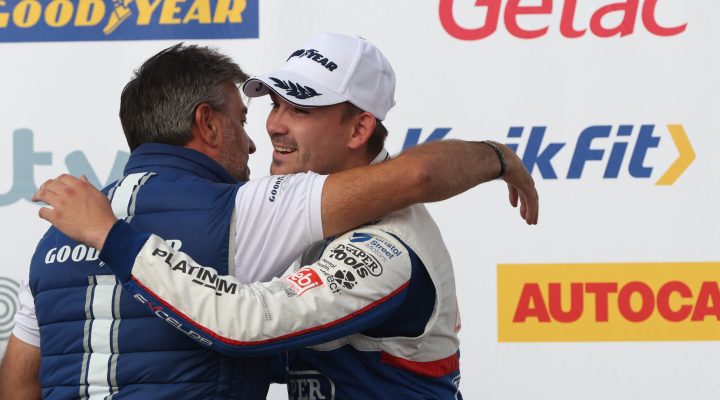 Thruxton’s rounds of the Kwik Fit British Touring Car Championship saw Jack Butel enjoy his best weekend of the campaign so far after the Bristol Street Motors with EXCELR8 TradePriceCars.com driver successfully secured a second career Jack Sears Trophy win.The Jersey racer headed into the eighth round of the season at the Hampshire circuit seeking to try and challenge for a first overall points finish of the year, with an unhappy run of misfortune across the campaign having hampered his challenge.Having shown solid pace during the two free practice sessions in his EXCELR8 Motorsport-run Hyundai i30 Fastback N – which now sports a revised livery for the remainder of the season – Butel would line up 21st on the grid for race one.Although he climbed to 19th place in the early stages of Round 22, a wild moment heading through the high-speed opening turn that saw the Hyundai slide sideways mid-way through the 16-lap encounter cost Butel valuable positions.Recovering back to 20th place at the finish, Butel then suffered further misfortune in the early stages of race two when a clash with the Infiniti of Dexter Patterson on the exit of the final chicane saw him lose ground before another solid recovery saw him work his way back to 21st place.A fine start to the final contest saw the 26-year-old move up into 18th spot before an issue for George Gamble on lap two allowed him to climb into 17th.Running ahead of team-mate Tom Chilton heading into the closing stages, Butel then took advantage of a clash between Adam Morgan and Ash Hand to move into the top 15 and he took the flag to secure the final overall championship point.Returning to the pits at the end of the race, Butel then discovered that he had been the highest scorer amongst the Jack Sears Trophy racers across the weekend – meaning that he took home the victory at the circuit for the second year in succession.“After the way the season had been going, the Jack Sears Trophy wasn’t even a thought coming into the weekend and my main goal was to get three finishes and see if we could push for a point,” said Butel.