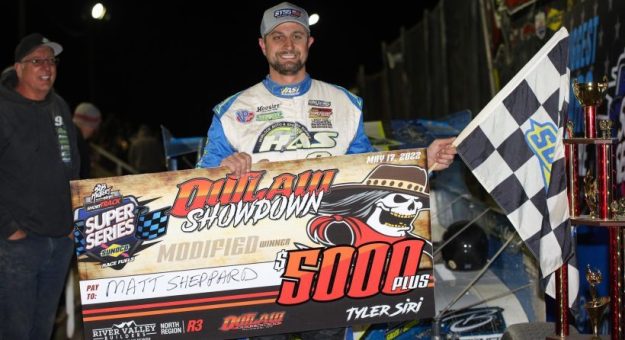 DUNDEE, N.Y. — For the 24th time in his career, Matt Sheppard triumphed in Bob Hilbert Sportswear Short Track Super Series Fueled by Sunoco competition, capturing the third stop on the River Valley Builders North Region tour at the Outlaw Speedway on Tuesday evening. “Definitely a lot of laps around this place; that certainly helped,” Sheppard. 27J, rocketed around both Friesen and Sheppard on the outside lane and narrowed the gap to Payne and Fultz. On lap 13, Friesen shoehorned under Wight for third as Sheppard set his sights on Decker. Decker held him off for a few laps but Sheppard eventually strangled the lead away from Decker on lap 18 on the very bottom of the track. Decker held second over Friesen and Wight as Mat Williamson rose to fifth after starting 12th. On lap 27 and after a few corners of side-by-side action, Friesen took second from Williamson and began his hunt of Sheppard. With 15 to go and Sheppard stuck in a pack of slower traffic, Friesen closed.