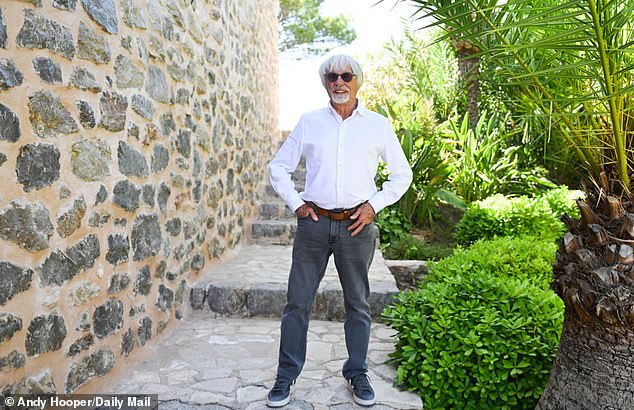 EXCLUSIVE: A weekend at Bernie’s! Former F1 chief Ecclestone is pin sharp at 91 ahead of the British Grand Prix, doting on his two-year-old son Ace – and still taking no prisoners!

Ecclestone arrived in Ibiza from Brazil last month. Ecclestone says: ‘Lewis might sell his position to Toto [Wolff, Mercedes’ team principal]. Of Russell, Ecclestone says: ‘I didn’t think he was that good but he has done an excellent job. ‘People think I only got this job because of Bernie,’ she says. Ecclestone played a pivotal role, one suspects, in helping Ben Sulayem being elected in December by a margin of two-to-one over English barrister Graham Stoker, the initial hot favourite. ‘He calls me on lots of different things and we talk but I never say to him, ‘Why don’t you do this, or not do that?’ Ecclestone asks: ‘What do you make of all this jewellery business?’ ‘I’d say if you can’t take them out, no problem, you’re just not driving a car with them in, that’s all. When the drivers used to say to me, ‘We can’t race in this weather’, I’d say, ‘OK, you don’t have to’. ‘I’ll do whatever you want, it’s not a problem,’ says Bernie.