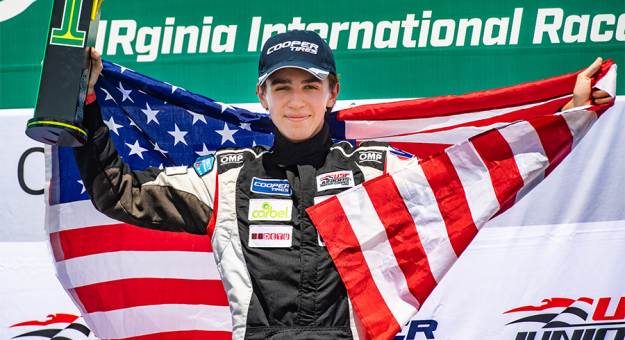 ALTON, Va. – Alessandro De Tullio claimed his first career USF Juniors Presented by Cooper Tires win in dramatic fashion Saturday at VIRginia International Raceway in an all-green flag race that saw four different lead changes during the course of the 15-lap contest on the 3.27-mile, 18-turn road course. Clark, who started on the front row, made his move on Fairbairn in turn two on the opening lap. As Johnson and Corry swapped the lead on lap 7, De Tullio displaced Clark for third and the fight was on. De Tullio made his move on Johnson on lap 11 and Corry on Lap 13 to take the checkered flag 1.955 seconds clear as his VRD teammates battled for second with Johnson eventually winning out.