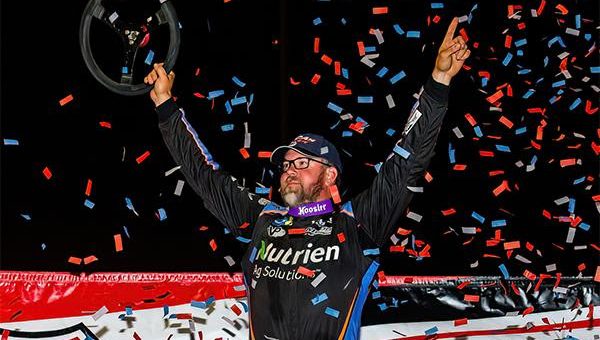 MINERAL WELLS, W. Va. — Jonathan Davenport led from start to finish before a packed hillside on Saturday night at West Virginia Motor Speedway. Starting alongside Davenport on the front row, Brandon Overton finished in second followed by Earl Pearson Jr., Gregg Satterlee and Friday night’s winner Devin Moran. Pearson had momentum on the bottom, but a caution on lap 34 halted Pearson’s drive to catch Davenport. On the restart with 15 laps to go Overton regained the second position from Pearson as the race went green until the final caution appeared with 38 laps scored. Pearson had won the last $50,000 to win race held at WVMS back in 2010 when he won the Dirt Track World Championship. Davenport’s win was his fourth in his last five starts at WVMS. Pearson, who held the second spot after starting on the inside of the fourth row wanted the race to stay green.