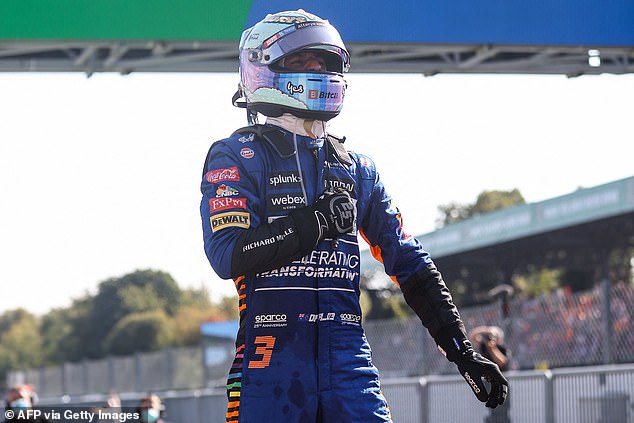 Lewis Hamilton and Max Verstappen crashed out of the Italian Grand Prix – with the halo appearing to save Britain’s seven-time world champion from serious injury. Verstappen ran out of room, and ran over the kerb which launched his Red Bull out of control and into Hamilton’s Mercedes. The front of Verstappen’s Red Bull was then beached in the gravel, and resting on Hamilton’s car. Ricciardo started second, but took the lead after beating Verstappen in the 430-metre charge to the opening chicane. Verstappen held the inside line and Hamilton diverted off track, running across the kerbs, and falling behind Norris. Ricciardo led from Verstappen, Norris and Hamilton, with the Australian the first to stop for fresh rubber on lap 22 of 53. Verstappen stopped the next time around, but was stationary for 11 seconds following a problem putting on his right-front wheel. Ricciardo remains in front ahead of Norris, Perez (who has a five-second time penalty) and Bottas. It’s the first time that Hamilton and Verstappen have both failed to finish a race when they have both been competing. Bottas started the race in 19th place but now finds himself in 4th. Verstappen was trying to go around the outside, but ended up crashing into Hamilton. Verstappen comes in for a pit stop but it takes 11 seconds. Ricciardo says his rear tyres are starting to take a hit.