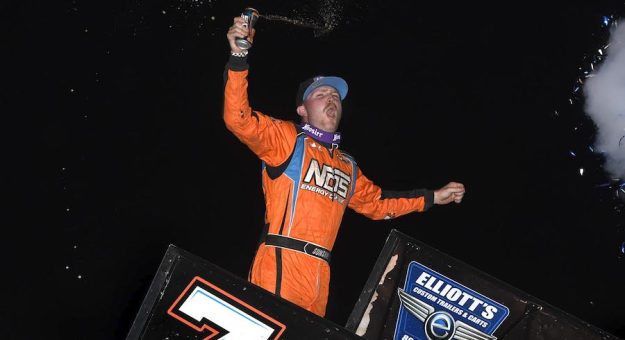 WAYNESFIELD, Ohio — Defending Tezos All Star Circuit of Champions presented by Mobil 1 champion Tyler Courtney earned his way back to victory lane on Thursday night, earning top honors in round seven of Cometic Gasket Ohio Sprint Speedweek presented by Hercules Tires at Waynesfield Raceway Park. Courtney’s fourth victory of the season against the traveling All Stars, also bumped his career total to 12. Despite being basically untouchable in A-Main action, Courtney, who is currently third in the Ohio Sprint Speedweek championship standings, faced some challenges, most of which in the form of lapped traffic. Peck’s last-ditch effort would fail, allowing Courtney to secure his first Speedweek victory. Peck remains in control of the Ohio Sprint Speedweek standings, holding down a 40-point margin over Cap Henry.