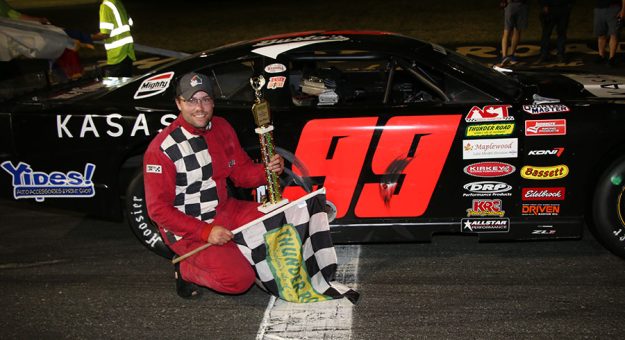 BARRE, VT — The month of June ended with the thunderous roar from high atop Quarry Hill in Barre, Vermont on Thursday. The rk Miles Street Stocks started off the night’s festivities after Patrick Tibbetts and Juan ‘Paco’ Marshall took dominant heat wins in the two qualifying rounds. Tater was followed to victory lane by two former winners in 2022, the No. Worcester’s Rodney Campbell and Graniteville’s Frank Putney took down qualifying heat wins. Last up, the Maplewood/Irving Oil Late Models took the main stage for their 50-lap feature on Scout Night. After dominating the event from the start, Montpelier’s Cody Blake had to deal with Wolcott’s Marcel Gravel and Graniteville’s Stephen Donahue breathing down his neck for the first time as the field tightened up for the restart. Blake took down his first win of 2022 followed by podium frequenter Marcel Gravel and Stephen Donahue following his hard charge from 15th.