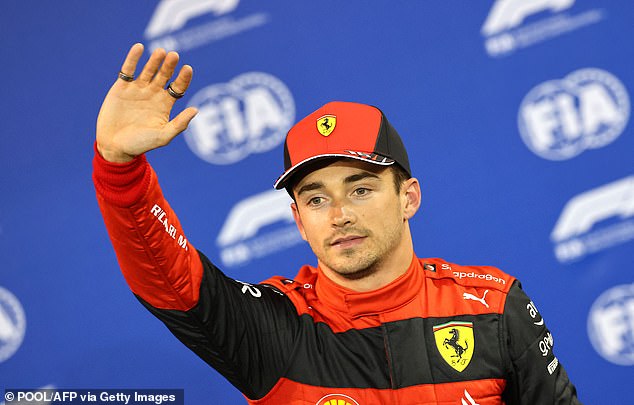 Charles Leclerc takes pole position ahead of Max Verstappen at the Bahrain Grand Prix as Ferrari FLY at the F1 season opener… but it’s a disaster for Mercedes with Hamilton fifth and Russell in NINTH!

Lewis Hamilton could only manage fifth best in qualifying for the Bahrain Grand Prix – a disappointing but not abysmal return in a struggling Mercedes. Carlos Sainz has never been on pole position before but he has a glorious opportunity to do so here. Charles LeClerc then sets a 1.30.7 and he is beaten by Carlos Sainz. The Mercedes pair of George Russell and Lewis Hamilton are first out on used tyres. Charles LeClerc goes faster but is still just over a tenth and a half behind Verstappen. Alex Albon sets a time which is 1.9 seconds off the pace and he is in 13th. Hamilton then crosses the line in fifth and is eight tenths down on LeClerc’s time and is behind Bottas. Top five at the moment are LeClerc, Sainz, Verstappen, Bottas and Hamilton. Charles LeClerc puts in a very pacy lap to go fastest by over four tenths of a second. Carlos Sainz then crosses the line and goes a tenth behind his team-mate for a second. Six tenths separating the top six which was rounded out by Sergio Perez, new Mercedes driver George Russell, Carlos Sainz and Lewis Hamilton.