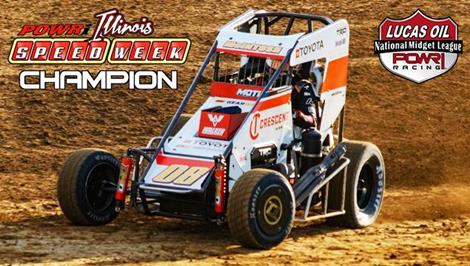 (6/28/2022) Winning three of five nights in Land of Lincoln racing, Cannon McIntosh of Bixby, Oklahoma would silence any doubters as to who would be the title-holder in the Ninth Annual POWRi Illinois SPEEDWeek Champion. Finding victory lane on nights three and four at Lincoln Speedway and Macon Speedway, Cannon McIntosh would notch his fourth career POWRi National Midget SPEEDWeek Victory over the week-long Illinois tradition, tying Michael “Buddy” Kofoid for second in all-time wins and second only to Tanner Thorson with eight career wins. Final Top-Ten for the Lucas Oil POWRi National Midget League 2022 Illinois SPEEDWeek Championship Standings: 1.