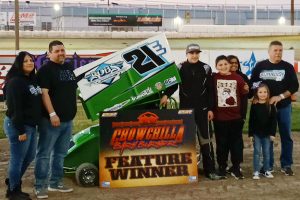 STOCKTON, Calif. – Evan Burrola won Sunday afternoon’s second round of the Stockton Challenge at Delta Speedway, earning the victory in the 20-lap Open 500 Outlaw feature. Burrola persevered over a lap 16 restart to hold off Talin Torres for the win. The leaders navigated through lapped traffic on lap nine, with Nelson using a lapped car as a pick to lead lap 10 over Stepps. A caution flew on lap nine for Heston Stepps of Oakdale and Mylee Wood up against the wall in turn two. After a caution on lap six, Correia and Guthrie traded the lead before Correia wrestled it back on lap eight. Connor Grasty led all 15 laps for a comfortable win in the 250 Outlaw Kart division. Bill Macedo led the opening lap before third starting Anthony Silva took over.