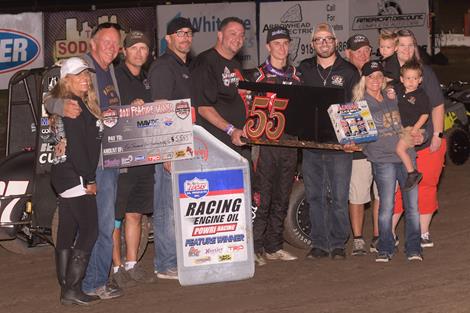 Tulsa, OK. (10/14/2021) Michael “Buddy” Kofoid of Penngrove, CA picked up where he left off with the series and earned his Keith Kunz team the Annual Donnie Ray Crawford Sonner State 55 victory at Port City Raceway in Tulsa, OK. Kofoid dug himself out of his 19th starting position to charge his way to the lead to capture his eighth Lucas Oil POWRi National Midget League Victory of the year. Tanner Berryhill assumed the lead as the field got brought back to green. On the restart with 33 laps to go, Berryhill re-assumed the lead with Christopher Bell following in second, Tanner Thorson in third, and Buddy Kofoid in fourth. As soon as Kofoid found himself in the lead, he never looked back and went on to capture his eighth Lucas Oil POWRi National Midget League Victory. POWRi Lucas Oil National & West Midget League Feature Results (30 laps): 1.