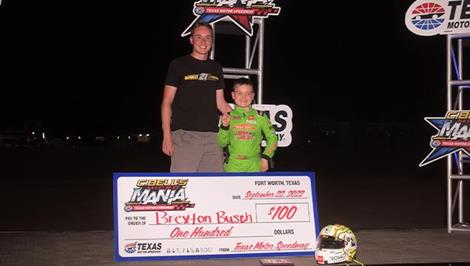 (9/22/22) Brexton Busch would stay perfect on the night at Lil’ Texas Motor Speedway in the debut action of C. Bell’s Micro Mania with the POWRi Jr Sprint League preliminary feature event on Thursday Night to claim their first league and possibly biggest feature win of their emerging career. Brexton Busch, Gavin McDonald, Noah Betts, and Jaydon Hiller each would claim heat racing wins with Jagger Wiggs gaining the lone semi-feature victory. Restarting after a mid-race caution would witness Owen Larson strike to the lead past Brexton Busch with Mattix McBride following suit into the runner-up spot. “I tried to follow Owen on every lap but just go higher every time and I was able to get the lead back, this win means a lot,” said a victorious Brexton Busch as the first feature winner at Lil’ Texas Motor Speedway in C. Bell’s Micro Mania with the Jr. Sprints.