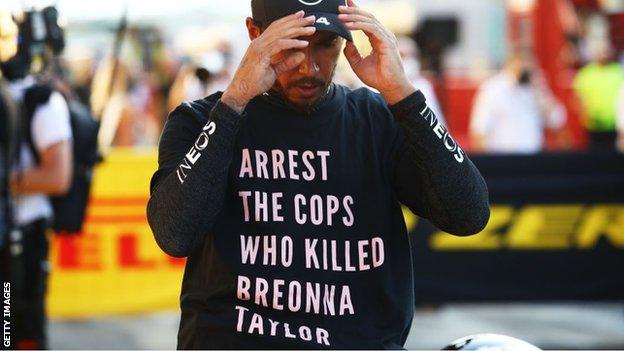 Last updated on Less than a minute agoLess than a minute ago.From the section Formula 1. A spokesman for the FIA said the matter was “under active consideration”. He said the FIA was a non-political organisation and was considering if Hamilton’s T-shirt broke its statutes. Hamilton’s shirt, which he wore during the pre-race anti-racism demonstration and on the podium, also said: “Say her name.”. Asked whether the FIA considered the T-shirt to be bearing a political message, the spokesman said: “That’s the consideration we are looking into.”. Hamilton has been at the centre of the demonstrations, as the sport’s most high-profile figure and its only black driver. The spokesman said that the FIA had been working with Hamilton on its diversity programme this year.