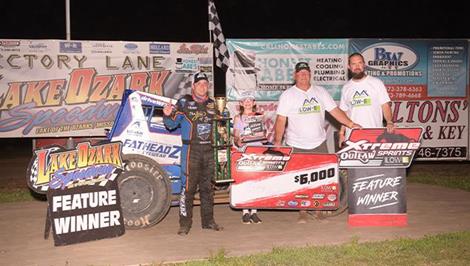 (6/11/22) Brady Bacon would find the fastest line in the Lake Ozark Speedway Non-Wing Nationals feature event with the Lucas Oil POWRi Wingless Auto Racing Sprint League running in conjunction with the Xtreme Outlaw Sprint Series presented by Low-E Insulation, notching their ninth career WAR win in the white-knuckle twenty-five lap main event. Finding speed in the early stages would see Robert Ballou lead Jake Swanson, Matt Westfall, Mario Clouser, and Brady Bacon to round out the opening top five with drivers slicing and dicing through the field. Sliding for the lead after a lap-five restart, Jake Swanson would take the lead from Ballou in turns three and four with Westfall and Bacon behind the leading pair. Halfway through the feature would Swanson leading a battling Brady Bacon and Robert Ballou inside the top-three as Bacon stayed on the inside line to take the lead on lap fifteen.