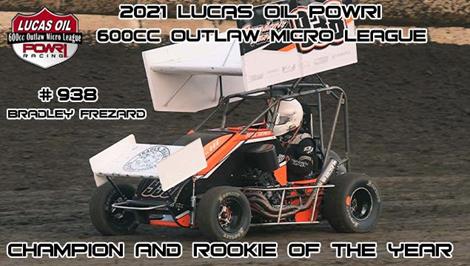 (11/9/2021) Flying onto the racing scene from Bonnerdale Arkansas, the Lucas Oil POWRi 600cc Outlaw Micro Sprint League presented by Engler Machine and Tool would see greatness appear this season as Bradley Fezard ramped up the competition level as well as excitement surrounding the season with a dual championship accomplishment. In just his first season Fezard would earn his first career series feature victory late in the season at Caney Valley Speedway to solidify his championship quests. In just his first season in the series, Fezard would win the overall championship by an overall margin of 230-point advantage. The full 2022 Lucas Oil POWRi 600cc Outlaw Micro League presented by Engler Machine and Tool schedule is currently being finalized and will be released in the upcoming weeks.