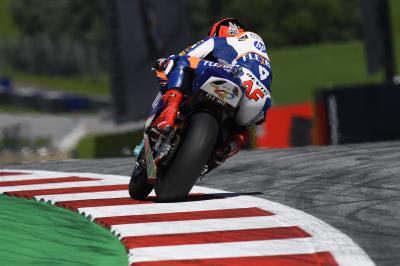 Red Bull KTM Ajo’s Brad Binder has given the Austrian factory Friday honours in the Moto2™ class after setting a 1:29.029 in FP2 at the myWorld Motorrad Grand Prix von Österreich.
Binder, fourth quickest in FP1, soon found himself at the top of the timesheets in FP2, but Jorge Navarro (Beta Tools Speed Up) and Jorge Martin (Red Bull KTM Ajo) were the only riders to go fastest than their FP1 times halfway through the session.
Czech GP podium finisher Enea Bastianini (Italtrans Racing Team) ends Friday inside the top five just 0.187 adrift of Binder, the Italian going quicker in FP2 after finishing 18th in the morning.