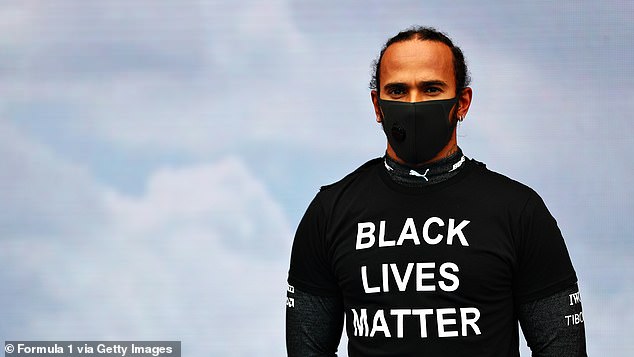 The 89-year-old creator of modern grand prix racing has hit back at the six-time world champion after his crusading for Black Lives Matter, including encouraging his fellow drivers to take a knee and striking a ‘Black Power’ salute after winning in Austria earlier this month. Former F1 supremo Bernie Ecclestone has hit back at six-time world champion Lewis Hamilton (pictured) after his crusading for Black Lives Matter. ‘At a race weekend, I was given a car and a driver to use. I was in the car with Jochen Rindt, the F1 driver, on the way to the race track. A black person was walking in the road and the white driver opened the car window and, with a cane, hit the black person and made him walk on the side of the road. Jochen and I pulled the driver out and put the black person in the car and drove to where it was OK for our new passenger to get out safely.