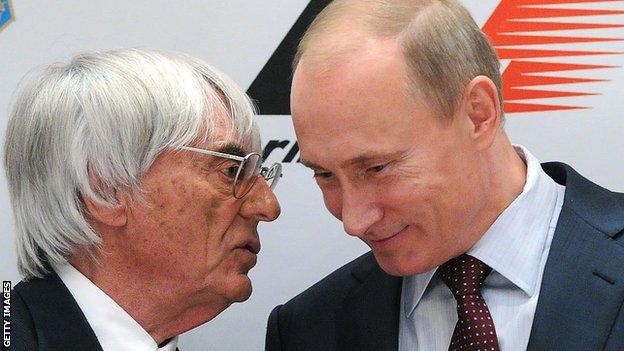 Bernie Ecclestone: Ex-F1 boss’ comments on Putin and racism far from ‘modern values of our sport’

Formula 1 says comments by the sport’s former boss Bernie Ecclestone on Vladimir Putin and racism are in “stark contrast” to “modern values”. On Thursday, Ecclestone said he would “take a bullet” for Russia’s president. He also said Lewis Hamilton should have “brushed aside” racist comments. Ecclestone built up a relationship with Putin when they were establishing the Russian Grand Prix, which made its debut in the Black Sea resort of Sochi in 2014. But an FIA spokesman said: “The two of them know each other, but there is no advising going on and hasn’t been since he became president, and as far as I know before that. When it was put to him that he could not justify the actions of Putin and the deaths of thousands of people, he answered: “I don’t. Ecclestone also criticised Ukraine’s president Volodymyr Zelensky, saying he could have stopped the war by negotiating with Putin. Ecclestone added that he was “not sure” he would have made the same decision. Ecclestone said he was “surprised Lewis hasn’t just brushed it aside, or better than that, replied”. Ecclestone said: “It’s probably not appropriate with us but probably it isn’t something terrible that happens if you said that in Brazil.