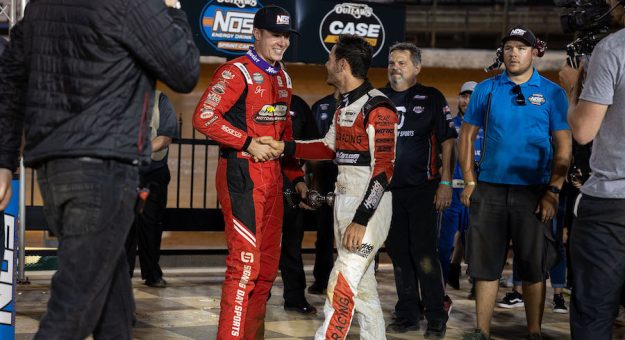 BRISTOL, Tenn. — After several heartbreaking losses earlier this year, Spencer Bayston and CJB Motorsports were bound and determined to strike while the iron was hot on Saturday night at Bristol Motor Speedway. Larson made his move down into turn one, but Bayston floored it and stuck the high side to fend off the first attempt. 5 between Larson’s right rear and the outside wall with only inches to spare. “I’ve got all the respect in the world for Kyle [Larson],” Bayston said. Officially, Kyle Larson crossed the stripe behind Bayston by0.762-seconds, but he was really only a matter of inches away from claiming his first win on the dirt version of Bristol Motor Speedway. I don’t think Bayston had more than an inch between him, Larson, and the wall, so hats off to him.