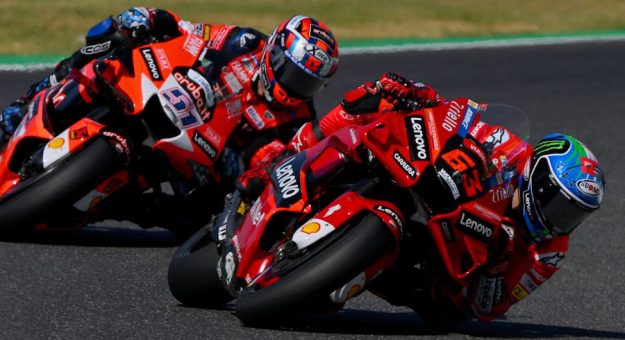 MUGELLO, Italy — The Ducati Lenovo’s Francesco Bagnaia has scored his first victory in his home MotoGP race, the Gran Premio d’Italia Oakley. World Championship leader Fabio Quartararo was a commendable second on a Monster Energy Yamaha MotoGP entry, which had to make up speed in the corners, while Aprilia Racing’s Aleix Espargaro finished third for the fourth race in a row. Rounding out the top 10 were Takaaki Nakagami (LCR Honda Idemitsu), Miguel Oliveira (Red Bull KTM Factory Racing), and — in his last race before yet more surgery on his right arm — Marc Marquez (Repsol Honda Team).