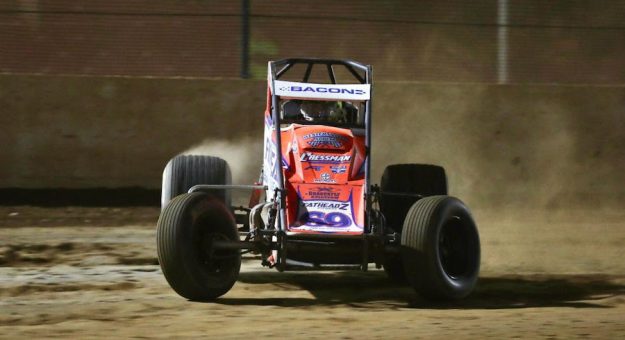 Bacon’s superb performance from start to finish in Bloomsburg’s $6,000-to-win feature, however, was not enough to overtake Logan Seavey for the Eastern Storm title. Reacting to the changeup, Bacon slid himself into turn one on lap six while Stockon trucked through the middle. At the halfway mark of the 30-lap feature, Bacon was in the midst of his trouncing as he held a 1.8-second advantage over Justin Grant, who, on lap 14, had dove under Stockon in turn one then raced ahead at the exit of turn two to steal away second. Seavey spurted ahead of Stockon a lap later on 15 when he beat Stockon to the entry of turn three to position himself into second. “Luckily, we got to the front early,” Bacon stated. Seavey promptly put his stamp on a first Eastern Storm championship with a third-place finish.