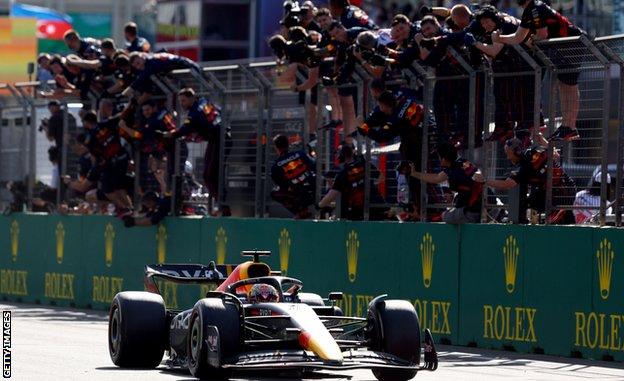 Verstappen led team-mate Sergio Perez to a Red Bull one-two, as George Russell took third for Mercedes, with team-mate Lewis Hamilton fighting back to finish fourth. Ferrari leapt on the opportunity to pit for fresh tyres, which Red Bull did not, hoping that it would vault Leclerc into the lead – which a few laps later it did. As Leclerc dropped briefly down to third following his stop, Verstappen soon closed in on Perez and passed for the lead on lap 15, after the Mexican was told “no fighting”. After the Red Bull drivers’ stops, the race looked set to boil down to whether Leclerc, in the lead, could hold off the challenge of the Red Bulls, who would have a significant grip advantage. Verstappen comfortably had the measure of Perez and the two cars cruised to the flag.