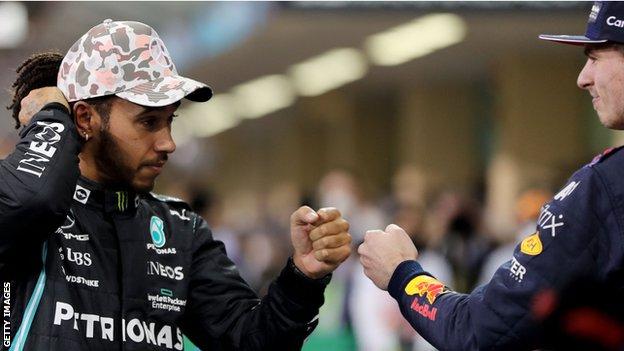 Both Hamilton and Verstappen go into the final race locked together on 369.5 points – only the second time this has happened since F1’s first season in 1950. Verstappen has the advantage after taking pole position in his Red Bull with a quite exceptional lap around Yas Marina on Saturday that left Hamilton and Mercedes breathless. Verstappen started the weekend complaining that he was being treated differently from other drivers by the stewards. “But this year we have been pushing each other, certainly in some races, to the limit. Verstappen made no mistake this time, but there may yet turn out to have been be parallels between the two races. The ‘medium’ tyres on which Hamilton starts the race are slower over one flying lap, but faster over a full race stint, and last longer. The softs, on which Verstappen, Perez and Norris will all start the race, offer more initial grip, so Hamilton will have to be wary not to lose places at the start. Verstappen admitted that he wanted to start on the mediums.